Indoor air quality testing is our business, let's discuss how it affects your business or workplace. 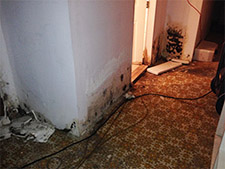 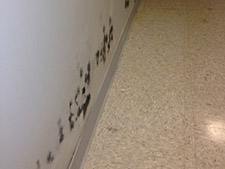 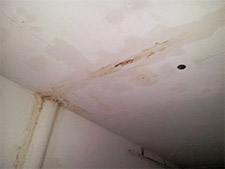 Recurring water leak from a ceiling that resulted in heavy mould growth in wall.

Pink mould on ceiling of house. 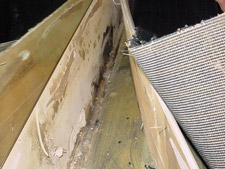 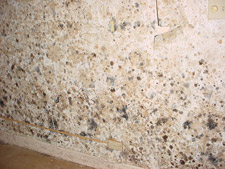 Mould on wall of house

Indoor Air Quality (IAQ) is one of the most complex challenges facing the building industry today. Of all potential IAQ concerns, mould (mold) and moisture combined are by far the most serious of the IAQ challenges facing the building management and construction industry today. In fact Volume 2 of the Barrett Report (on leaky condos) determined that mould (mold) and moisture resulting from building envelope failures can impact both the structural durability of the building and the health of both the building occupants and the construction workers.

These investigations have enabled us to apply techniques developed for IAQ assessments to identify and solve moisture problems and in a sense we are exploring this complex building envelope performance issue from a perspective different from that of engineering based building envelope experts.

A recent International Conference, Healthy Building 2000, identified mould and moisture in buildings as a worldwide problem. Microbial contamination of building envelopes and mechanical systems was identified as the single most important IAQ issue of international attention.

Causes of Mould Growth in Buildings

Mould (mold) and moisture damage to the building is caused by a number of factors:

The primary method of assessing potential mould issues in buildings is through thorough visual inspections as defined in the WorksafeBC Guideline 4.79 to the Occupational Health and Safety Regulation and the New York City Department of Health “Guidelines on Assessment and Remediation of Fungi in Indoor Environments”.

Based on this protocol, Sterling IAQ Consultants Ltd. conducts inspections of HVAC systems and buildings for signs of moisture and/or visible mould growth. Sometimes baseboards and carpet are pulled back and other times a boroscope is used to inspect wall cavities or inside ductwork.

Based on the results of our visual inspections, there may be a need for sampling. There are three basic sampling methods used to assess mould contamination in buildings:

Bulk sampling involves aseptically cutting a sample of material such as wallboard, insulation, settled dust, or carpet; and determining contamination of viable organisms. This method produces qualitative rather then quantitative results by detecting the presence of a mould on or in the sample.

Surface sampling involves aseptically collecting a sample from the surface of a material such as shelves, walls or pillars. There are various methods used to collect the sample including: wetted swab, tape lift, contact plate, or a suction device such as a micro vacuum.

Again this method produces qualitative rather than quantitative results identifying the presence of a mould.

Air sampling is a method used to sample air in the occupied space of a room, in the building envelope or in the ventilation air provided by the HVAC system serving a building to determine biological contamination. There are two commonly used sampling methods: